As you know I cross train between BJJ and Judo. First thing, stop comparing these two sports.

Judo club spends most of its time on the takedown and BJJ on the ground fighting (newaza).

Consequently, if you took two twins and put one in Judo and the other in BJJ for an equal amount of time, one would be good at the takedown and have a rudimentarily (though not necessarily trivial) understanding about ne waza. The other would be far more adept on the ground but unlikely to know any decent takedowns.

Of course there is TONS of variation between clubs and coaches, so this is just stereotype.

The techniques are different because rules are different, and these rules are what make the two sports come out differently. Both our twins would be working on similar skills, though, and could easily cross-train with each other (assuming the BJJ guy learns to land his falls safely).

In Judo, you get about 10 seconds to complete your ground fighting (you need a fast submission) and you can win with an ippon (perfect score). This leads to guys turtling up in a ball and stalling. In BJJ, you’re toast if you do this as you’ve just given up your back. You can also go to guard in Judo and stall out there until the referee stands you back up.

In BJJ, as you know, the ground fighting is where it starts getting going for real. The takedown counts for 2 points, no matter how phenomenal it may look. Hence, all the jumping to guard.

Again, though, both have the same techniques in their curricula though they emphasize different things.

As for history, Koma, who came to Brazil was one of Jigaro Kano’s original students, so it’s a fair argument that BJJ came from Judo. Both evolved differently, though. Judo, being an Olympic sport, had to emphasize the Olympic rules which were a little more safety-oriented as well as spectator-oriented. Hence the funny rules about pistol-gripping the cuffs, the short time on the ground, and the emphasis on audience-pleasing throws which are the trademark of Judo.

BJJ allows armlock submissions (armbar, keylock/americanna, kimura, etc.) at lower belt levels than Judo as well as leg submissions at higher levels, though Judo certainly has them, too.

Helio Gracie, the one who really made BJJ popular, fought a Judo fighter named Kimura and had his arm broken and career ended by that upside-down keylock we have since called the “kimura”.

Lastly, there are cultural differences in the sports. BJJ has a more Brazilian culture which reminds me of college sports. Judo has a more punctilious and proper Japanese culture.

At BJJ we start off by calling out “Black Belt on the mat!” and line up and some may greets the coaches with a quick hug. It’s warm-hearted and friendly and personal. In Judo, people line up by belt colour, bow, meditate, and bow some more. The difference is purely cultural.

Names in BJJ are also in English for the most part and they are descriptive. A choke is a choke, not a shimi waza. An armbar is an armbar, not Ude Hishigi Juji Gatame.

These names make sense in Japanese (they’re not named “Flying Technicolor Dragon Sweeps Wings over Spotted Leaping Weasel”). Having the names standardized in Japanese is not a bad idea for an international sport. Doctors and scientists do it with latin names.

Also, there is a slight variation in some of the techniques. Notice that here: http://judoinfo.com/jujigatame.htm at the bottom, the attacker has his feet crossed. In BJJ, we know not to do this as the guy is more likely to escape. I think that anyone (Judo, Submission Wrestling, BJJ) who has spent enough time competing on the mat (not just practicing moves but actually using them, instead) will come to similar conclusions.

These two cousin martial arts are probably the best thing that could have happened to each other. 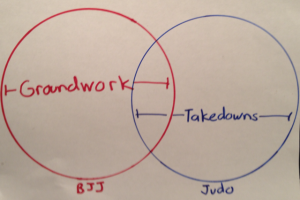 No monthly fees or contracts.